Brazil a wreck on trawling control

The lack of control amplifies the impacts of trawling, a technique that uses fine-mesh nets to “scrape” the seabed, sweeping up everything in their path; species of low commercial value return to the waters, almost always dead. 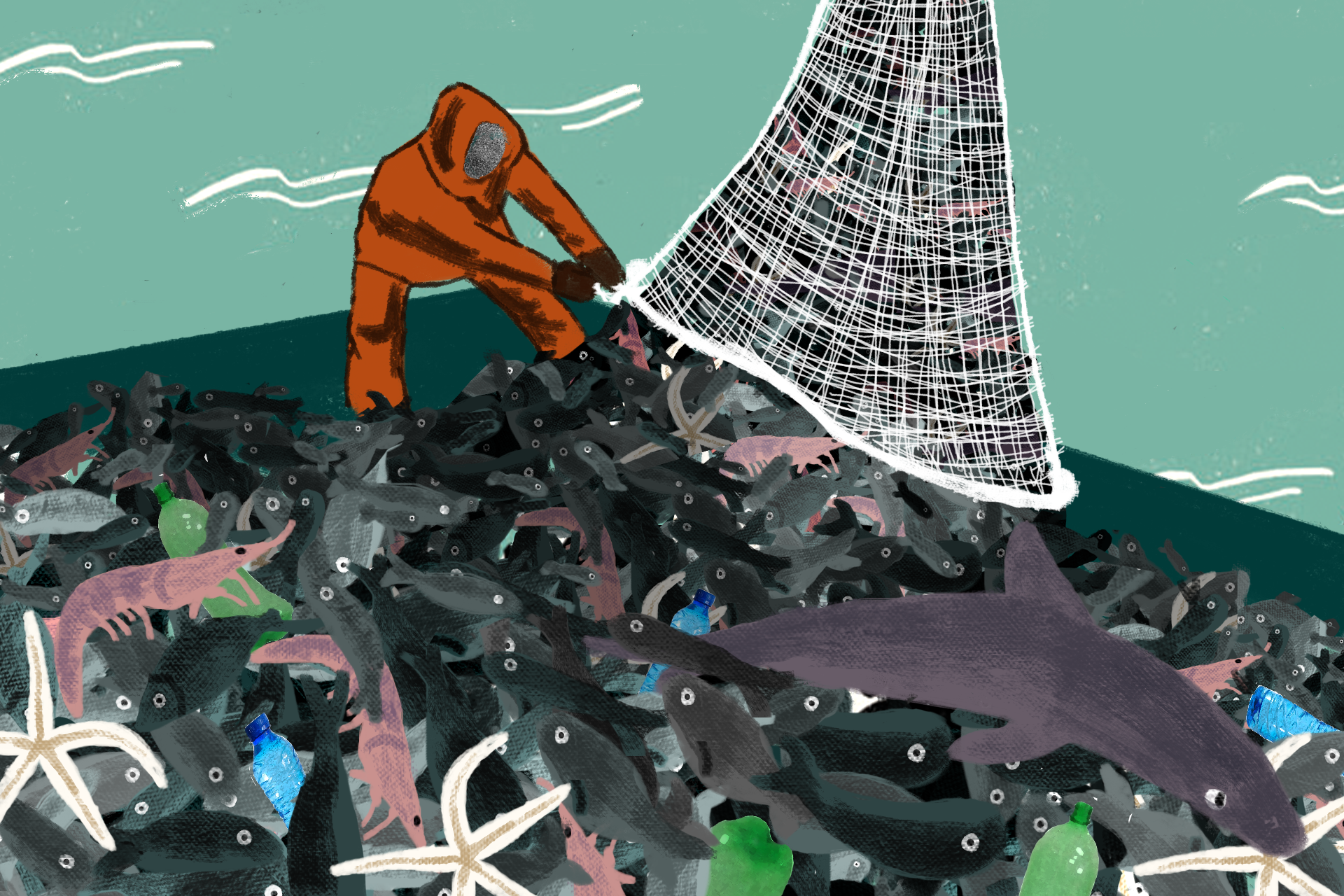 Trawling has been uncontrolled for decades in Brazil, claim public agencies, researchers and fishermen. Lack of statistics, inspection and adequate management threaten marine life and fishing itself in the country. Moreover, political and private sector interference has increased under the extreme right-wing government of Jair Bolsonaro.

For the Federal Audit Court (TCU, in Portuguese), the management of fishing in Brazil faces serious problems, including a lack of fisheries data, planning and policing. The court, created by the 1988 Federal Constitution, helps the National Congress control the execution of the budget and other public policies.

Fisheries management is “weakened and inadequate due to the critical absence of essential information, the serious deficiency of government planning and the harmful misuse of the little information available, besides the critical obsolescence of systems and the unacceptable lack of transparency in the minimal information that is available and of decision-making processes,” declared the minister André Luís de Carvalho.

The audit published in July was requested by the Chamber of Deputies and reached similar conclusions to that of an analysis made in 2012 by the same Federal Audit Court. With the portfolio for national fisheries governance, the Ministry of Agriculture has until the end of the year to reform management of the activity. The measures will be monitored by the TCU.

Meanwhile, the lack of control amplifies the impacts of trawling, recognized worldwide as very harmful to marine life. The technique uses fine-mesh nets pulled by boats to “scrape” the seabed in search of shrimp and other animals. They sweep up everything in their path. Species of low commercial value return to the waters, almost always dead.

“All over the world, trawling leads to the death of about 4.2 million tons of non-target species annually and decreases revenues by interrupting the growth of juvenile fish. Trawling threatens ocean ecosystems around the planet,” Brazilian researchers reported in an article in the April issue of Science magazine.

The trawlers arrived in Brazil together with industrial fishing, after World War II (1939-1945). International policies of the time were intended to heat up developing economies and fight hunger by expanding the consumption of marine products. Nowadays, this fishing is practiced in almost all regions where there are no legal barriers.

Scientific director of the NGO Oceana, Martin Dias, reinforces that fishing regulations in Brazil are an entanglement net of laws and rules that are outdated or simply never applied, which, in practice, allow trawling at any time and at any point over the 3.6 million km² of sea in the country’s jurisdiction. This area is larger than the entirety of India.

“[Our] fisheries management doesn’t work. Our management is inefficient, with loose and disconnected rules. Practically no fishery has adequate management, there is no long-term planning, and we always have more regulations published in the face of social, environmental, or economic crises. We deal with the symptoms and not the causes of the problems,” he emphasized.

Not coincidentally, Brazil is one of the countries where fishing in general harms marine life the most. A study published in 2017 by the journal Proceedings of the National Academy of Sciences places the country 26th in a ranking of 28 major fishing nations based on efficiency. Brazil is only ahead of Myanmar and Thailand, both in Southeast Asia.

The lack of productive statistics from the sector and disregard for relevant technical information hinder the control of fisheries in Brazil. The country has not known what and how much has been taken from the sea since 2011. At the time, lack of budget and management alternating between different federal agencies began to mask fisheries numbers.

The sardine catch has already fallen from 80,000 tons to about 15,000 tons annually. Stocks of mullet and other species are also shrinking, according to experts. Ignoring the size of fisheries can cover up declines in fish and other marine life populations, reduce federal and state tax revenues, and even the income of formal and informal workers.

“This impacts fisheries science, management and conservation. A country that does not know what it fishes is subject to great uncertainties in management, which should be conducted based on the precautionary principle. The fishery cannot follow a ‘permissiveness by optimism’ [principle],” Beatrice Padovani, Associate Professor in Oceanography at the Federal University of Pernambuco.

The statistics also help to define how much marine life is threatened with extinction. But this policy has not been protecting it. Commercial species that could disappear from the map jumped from 17 to 64 (376%) between 2004 and 2014. The data are from Oceana. A new “red list” should be presented this year by the government, but the entity points out that the country does not know the status of 110 (94%) of 118 commercial fish stocks.

“Many resources lose economic importance through depletion. Several fish stocks may be depleted when new fishing statistics and lists of animals threatened with extinction are produced. Who is interested in not having this information?” questioned the head of the Marine Biology Department of the Federal University of Rio de Janeiro, Marcelo Vianna.

In this regard, in April 2019 the Ministry of Agriculture claimed “great negative repercussions in the fishing sector and economic losses” and tried to suspend the official list of endangered fish and aquatic invertebrates. The following month, the Secretary of Aquaculture and Fisheries, Jorge Seif Junior, claimed that the 2014 list was built on “unreliable data”.

The balance sheet for that year showed 475 species of fish and aquatic invertebrates threatened with extinction.

“Fisheries management in Brazil is very much used as ‘political currency’. So it is difficult for the technical [issue] to win,” said an official federal source who asked not to be identified. The federal government refused any requests for interviews with public employees from the environmental sector. Brazil’s political reality reinforces his view on fishing.

Until he was appointed by Jair Bolsonaro at the beginning of 2019, Jorge Seif Junior was a businessman in the fishing industry, in Santa Catarina state. His tenure was celebrated by the private sector, but criticized by environmentalists and researchers. His family is still active in the industry.

The sources heard by EJN and O Eco claim that his management conflicts with  federal law that prohibits the occupation of public posts by leaders linked to private interests. Through the Access to Information Act, the Secretariat of Aquaculture and Fisheries commented that Seif has been properly screened by existing law and that he is dedicated only to the position.

“To avoid possible conflicts of interest, the current National Secretary of Aquaculture and Fishing submitted himself at the beginning of his tenure to the Ethics Committee of the Presidency of the Republic, besides having distanced himself from the companies in which he had shares,” commented the agency.

It is precisely in Santa Catarina that the largest fishing companies in the country are located, and its boats scour the South and Southeast coasts (picture below). There are 236 trawler boats registered in the city of Itajaí alone. Fishermen, crew members, and fish processing companies accumulate almost 6,400 direct and indirect jobs, according to the regional union of ship owners and industries.

At the end of 2020, Minister Kassio Nunes, Jair Bolsonaro’s nominee to the Supreme Court, granted a government request to allow trawling in the neighboring state of Rio Grande do Sul under a preliminary decision. The state had banned such fishing for up to 22 kilometers off the coast since 2018. The “sustainable resumption” of trawling in the region depends on measures slated to be implemented by the government within 18 months.

“Trawling is one of the most harmful practices. We are in a titanic struggle to maintain our activity because 80% of the catches on the Rio Grande do Sul coast come from boats from other states. And the fish and shrimp stocks have been falling due to abusive fishing and disrespect for the law,” said Alexandre Novo, from the Fishing Shipowners Union of Rio Grande do Sul.

The Secretariat of Aquaculture and Fisheries answered through the Access to Information Act that it pushed for the return of trawling in Rio Grande do Sul because of “a question regarding the sovereignty of the Brazilian State in legislating Brazilian Territorial Sea[waters]” and that “any fishing activity that was forbidden in this region by any state in Brazil the SAP/MAPA would be the same.”

But what happens in practice may be different. Ten states already restrict trawling by law in an attempt to maintain and renew stocks of fish and other animals — Amapá, Rio de Janeiro, Alagoas, Rio Grande do Norte, Maranhão, Ceará, Pará, Rio Grande do Sul, São Paulo and Pernambuco. The plenary of the Federal Supreme Court has not yet ruled on whether they can regulate fisheries on their coasts.

“We are unaware of any initiative by the federal government regarding restrictive measures on trawling in other states, besides Rio Grande do Sul,” warned Gustavo Cardoso, Professor in Oceanography at the Federal University of Rio Grande.

The widespread deregulation of the sector is also alarming. In the first two years of Bolsonaro’s government, 82 provisional measures, decrees and ordinances were published, interfering in the management of fishing and conservation of marine life. The estimates are from Política por Inteiro, a project that monitors federal public policies. The great majority of the rules were relaxed on these fisheries.

Catches are now allowed in the Fernando de Noronha Marine National Park (one of the most beautiful in the country), public waters on land and sea have been opened to the breeding of exotic fish without technical analysis, plans for the recovery of endangered species are frozen, and the management of the activity has been centralized once and for all in the Ministry of Agriculture.

“The government has worsened a dismantlement that was already underway. We have a secretariat and a ministry focused on production and we no longer have shared management. Today fishing is treated in the country only as a productive sector, disregarding that it involves the extraction of finite natural resources. Meanwhile, fisheries are collapsing all over the world,” concluded Natalie Unterstell, coordinator of Política por Inteiro.

The Secretariat of Aquaculture and Fisheries did not respond to our requests for an interview.

This story was produced by ((o))eco with the support of the Wilson Center and Internews’ Earth Journalism Network and was originally published on 17 August, 2021. It has been translated to English by ((o))eco, revised by Duda Menegassi and Sam Schramski, and lightly edited for length and clarity.

Brazil a wreck on trawling control